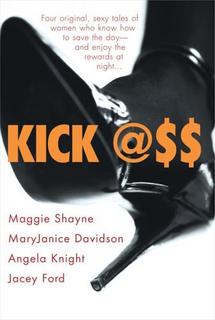 They're sexy. They're smart. And they aren't afraid of a little danger-not even when it comes to matters of the heart... Four of today's hottest authors present a quartet of stories about bold women who take no prisoners-either in a fight or in love. Whether it's in the bedroom, in the outer limits of the galaxy, or out on the mean streets, they kick heart-stopping action to the next level. These are women who can hold their own and aren't to be trifled with. The men in their lives know that-and they love it...

In “Warfem,” Alina Kasi reunites with her lover Baird Arvid after two decades apart. Passion instantly blazes between the two superhuman warriors, but old enemies and new lies may tear them apart. And Alina dreads what Baird will do when he finds out about the secret she’s been keeping for the past twenty years. But she soon discovers she’s not the only one keeping secrets.

ABOUT ANGELA KNIGHT
Angela Knight's first book was written in pencil and illustrated in crayon; she was nine years old at the time. But her mother was enthralled, and Angela was hooked.
In the years that followed, Angela managed to figure out a way to make a living -- more or less -- at what she loved best: writing. After a short career as a comic book writer, she became a newspaper reporter, covering everything from school board meetings to murders. Several of her stories won South Carolina Press Association awards under her real name. For more of Angela’s interesting bio, visit her website: http://angelasknights.com/bio.htm

REVIEWS
WARFEM got 4 ½ stars from Romantic Times, which said, “Passion and intrigue are plentiful in Knight’s ‘Warfem.”
Speaking of the whole anthology, Jill Smith wrote, “It would be hard to find a more exciting way to spend a few hours. Settle in for tons of fun and enjoyment.”
In Warfem, Angela Knight gives us a fantastic story of a love that never died and another look at those yummy Warlords! – Pam L at A Romance Review. Four and a half Roses http://www.aromancereview.com/reviews/index.php?app_state=show_event&bookid=6065

This was a great story!!! My favorite in the anthology!

I should also point out that our wonderful client, Beverly Brandt is also in this anthology, but Angela is the one who is "touring" this week on Out of the Blogosphere, so that's why I gave her the plug! :) Didn't want to confuse anyone.
hugs!