That's right! Deidre Knight is placing the author hat on her head and taking all questions tomorrow night on the TKA Chat!

Deidre Knight
TKA Chat Space
Tuesday, April 3, 2007
9:00-10:00 PM EDT
Don't miss out on this fabulous opportunity to chat it up with lead agent and author, Deidre Knight and find out how her publishing career has helped her as an author and all the awesome insight she has to offer to writers and fans of all kinds!
More about Deidre Knight:

Deidre Knight is a literary agent, mom, wife, novelist and southern woman, and proud to answer to all of these titles. Before she founded The Knight Agency in 1996, Deidre worked behind the camera in movies and television. During the ten years since she launched her literary agency, she has grown The Knight Agency to national prominence, shepherding authors on to every major bestseller list. With agency sales of more than 600 titles, a large percentage of which are in the categories of romance and women’s fiction, Deidre has established a reputation for discovering vivid and unique storytellers and is considered an industry expert on the hot trend of paranormal fiction. Writing in that genre, she creates fresh characters and strong, emotional storylines. One editor has described her as having “tremendous verve and a great knack for character and smart scenes.” Others have called her writing “outstanding” and “emotionally evocative.”
Deidre began her writing career at age nine, when her award-winning essay on Barbie was published in her hometown newspaper, The Atlanta Journal and Constitution. She has been writing in one form or another ever since. After nearly a decade of working with Knight Agency clients, helping them discover their creative potential, Deidre celebrated her own fiction debut in April 2006. Published by NAL, Parallel Attraction was the first in her innovative “the future meets the present” paranormal series. Her fiction launch marked the fulfillment of Deidre ’s lifelong writing dream, and she is excited to embark on yet another new and fulfilling creative journey--PARALLEL SEDUCTION!
Her Latest Release in the Midnight Warrior Series: 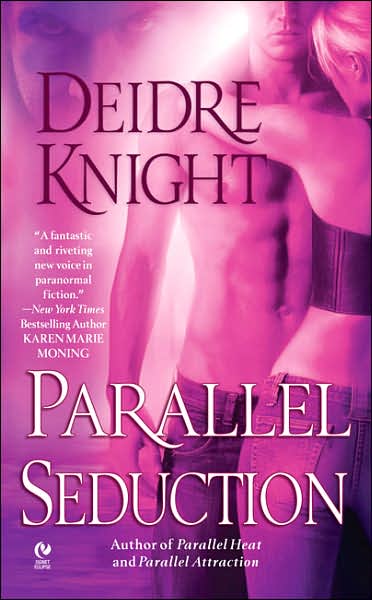 FBI linguist Hope Harper met half-breed Scott Dillon when the American military imprisoned him just prior to the war with the deadly Antousian invaders from space. They worked together to save the “timeline” and consequently the earth. The earthling female and the Refarian-Antousian warrior fell in love as she helped him survive his battle injuries and believe they have a life together.

However, the Refarian monarch sends another time traveler to insure the timeline is properly secured. Jake Tierney finds alterations in time that he cannot rectify and leaves him trapped. He also realizes he wants Hope. Scott fears the newcomer will destroy his new found happiness as he knows that Hope is attracted to both time travelers. She must choose between them as she shares “fond memories” with both of them.


The latest “Parallel” romantic science fiction thriller (see Parallel Attraction and Parallel HEAT) is an exciting much more complex thriller as Deidre Knight cleverly uses the paradoxes of time travel to shake up the linear relativity that readers use as a foundation of existence. The story line is driven by the triangle as Hope shares common memories with both time traveling hunks. The Lovin’ Spoonful’s classic refrain: “Did you ever have to make up your mind? Pick up on one and leave the other behind. It’s not often easy and not often kind. Did you ever have to make up your mind” seems so apropos to this fabulous sci fi romance.

~Harriet Klausner
SEE YA THERE!!!
Posted by Julie Ramsey at 12:31 PM

Anonymous said...
This comment has been removed by a blog administrator.
6:32 PM

Anonymous said...
This comment has been removed by a blog administrator.
6:42 PM