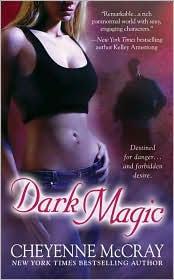 DARK MAGIC
by Cheyenne McCray
St. Martin's Paperbacks | November 2008
THE WAR BETWEEN GOOD AND EVIL
Jake Macgregor has his hands full. As San Francisco’s Captain of the Paranormal Special Forces unit, he and his team are facing a powerful enemy that threatens to bring down the city. With the weight of the world already resting on his broad shoulders, the last thing Jake has time for is romance. So why—after a long, hard day’s fight against evil—are his nights filled with dreams of Cassia?

IS ABOUT TO GET A WHOLE LOT HOTTER…
Cassia is a D’Anu witch whose birthright ensures power and honor beyond imagination. It also forbids the one thing Cassia wants the most: the love of mortal Jake Macgregor. When she intervenes in a skirmish to save his life, the consequences are inescapable—even though the magic they make together is too luscious, and potent, to resist…

Click Here for an Excerpt
ABOUT CHEYENNE McCRAY
New York Times and USA Today bestselling author Cheyenne McCray has a passion for writing urban fantasy, paranormal, and suspense novels. Among other accolades, Chey has won the prestigious Romantic Times Reviewers’ Choice Award for “Best Steamy Romance of the Year.”

Chey penned her first poem in kindergarten, and has been writing ever since she can remember. She always knew one day she would write novels, hoping her readers would get lost in the worlds she created, as she did in her favorites.

Now, she gets to write full time and loves what she does. For St. Martin's Press, she writes the bestselling "Magic" series. She also writes suspense novels, including the upcoming “Lexi Steele” series, starting in February 2009 with The First Sin. In June 2009 Demons Not Included blasts off a new urban fantasy series.

Chey has three sons, three dogs, a messy house, and she will do anything to get out of cleaning, which may be why she writes so much.

5 Stars “What an absolutely stunning conclusion Cheyenne McCray has penned for her ‘Magic’ series. “Dark Magic” is everything I would have wished for and couldn’t have imagined!” -- Goodreads

Congrats on all the great reviews Cheyenne!

You have been nominated for the I LOVE YOUR BLOG AWARD by Night Owl Romance!

Great reviews. I enjoyed the excerpt a lot! Sounds like my kind of book.

Very good work! Thanks a lot.