BRANDED BY FIRE
by Nalini Singh 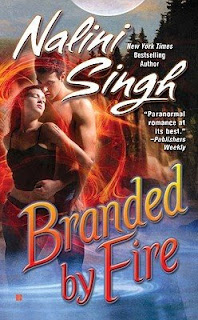 Though DarkRiver sentinel Mercy is feeling the pressure to mate, she savagely resists when Riley Kincaid, a lieutenant from the SnowDancer pack, tries to possess her. The problem is not simply that he pushes her buttons; the problem is that he’s a wolf, she’s a cat, and they’re both used to being on top.
But when a brilliant changeling researcher is kidnapped from DarkRiver territory, Mercy and Riley must work together to track the young man—before his shadowy captors decide he’s no longer useful. Along the way, the two dominants may find that submitting to one another uncovers not just a deadly conspiracy, but a passion so raw that it’ll leave them both branded by fire…

REVIEWS:
"As her legion of fans can attest, Singh has a rare talent for impressive worldbuilding, intricate plotting and riveting characterization. The Mercy/Riley relationship is intense and fraught with divided loyalties in this red-hot thriller. Singh delivers excellence every single time! " ~ Romantic Times (Top Pick)
"I loved Riley and Mercy..I recommend Branded by Fire as a rich, satisfying, very sexy and romantic read!" ~ Allison (winner of Branded By Fire ARC)
"I don't think there is a single paranormal series as well-planned, well-written, and downright fantabulous as Ms. Singh's Psy-Changeling series." ~ All About Romance
"Branded by Fire is the best Psy/Changeling romance to date, packing in everything I love about PNR today: hot, emotionally fulfilling romance, suspenseful action and a great world built to support it all in." ~ Lurv A La Mode
Click here for an excerpt.
ABOUT NALINI SINGH: Born in Fiji and raised in New Zealand, Nalini has been writing as long as she can remember. Her stories always held a thread of romance (even when she was writing about a prince who could shoot lasers out of his eyes). She loves creating unique characters, loves giving them happy endings and she even loves the voices in her head. There's no other job she would rather be doing.
Posted by Jia Gayles at 9:19 AM

I am so looking forward to reading this!