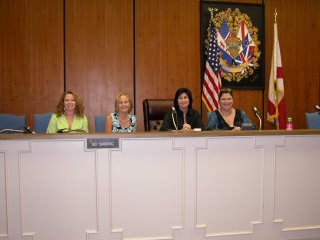 Thanks to my wonderful friend (and former editor), Louisa White for asking for an update on my event last weekend. Ahem, she's probably asking for a post--any post at all, right?? :)

Well, Wetumpka turned out to be a most interesting little town. Right off the bat Julie Ramsey and I (who went together) noticed that the place was a hilly town in the middle of a flat part of the state. Everything sat at surreal, odd angles, including the downtown structure itself that didn't have a square, but just intersecting streets. Well, what should we learn about this odd and quaint little town?
1) BISH FISH was shot there. Okay, so Tim Burton obviously saw the same sort of funky gothic feeling that I was starting to get. Hills where they didn't belong, that kind of thing.
2) The weird hills? Well, they were because Wetumpka sits right in the middle of a meteor crater.

The writing event was great, and one of the most interesting panels I've been on in that it was a three hour workshop and consisted of the authors talking a lot about process and craft, and I found it really challenged me. Plus, we got to sit on the judge's bench b/c it was in the court house. :) See pic.

In other news, I am getting pretty excited because my next book, PARALLEL HEAT comes out in a month. Working like a mad woman on the third book which is due on just about the same date that HEAT comes out! Some days I love writing, just thrive on it and feel like there's no greater gift in the world. More days than that, however, I pretty much find it a hellish existence. It's a lot of tough, agonizing work punctuated by a few natural highs. :)

Still, you reach a sort of "home stretch" point while writing a novel and, frusrating as it may be to pull the whole thing together, you still feel that growing sense of satisfaction, knowing that you'll have a book to be proud of with just a little more work.

You know me so well! I was, indeed, passive aggressively nudging you for a new post. Thanks for taking the hint! I'm sorry I missed the Wetumpka event--so many of my favorite people all in one place. (pout, pout) But I'm glad it went well!

PS--Finished my revisions, so now I finally get to read Parallel Heat. Yaaaaay!

Sounds like you had a great time. Parallel Heat is an awesome book and can't wait to read the next one!

I became insane; with long intervals of horrible sanity... just about sums it up well doesn't he. Poe that is. *grin*

The Muse ROCKED this weekend 30 fricking pages!! 30!!! I need to get pissed more often. LOL

Hugs on the upcoming release and the agony of the third writing.

I'm on a home stretch. My characters are happy. I love them. I can drum up a really good feeling when I think of them. Kind of like you'd feel when you think of really good friends. But like any friendship, we've had lunch a little too many times and have nothing much to say to one another at the moment.
So I decided to start another one with some new excitement, and as the result of a challenge that coughed up a new character and even style and enough freedom and self confidence to experiment with it a little bit.
I don't really believe in writer's block. I have flat days when I feel my writing doesn't zing. And I have high days when I wonder "Gee whiz did I write that?" But the drive and the conquest exist very deep inside me, beside those creepy creepy doubts and fears. But mostly it works when I sit down, face the computer and look at the blank page that I intend to fill with words. I kind of crack my knuckles and say to myself "come on Penny you can do it" and mostly I do.
I think I just bought the first two Parallel books. I hate starting something back to front. I say think because something happened with the order and the screen went blank on Amazon.I'll have to check my account later on.

You just summed up what a lot of us feel about writing, Deidre. But the natural highs are so worth it. The thrill of them can last for days... and then they die down to reality. lol

Weird about the meteor. Strange when stuff like that happens.