Author Tour: A DROP OF RED by Chris Marie Green 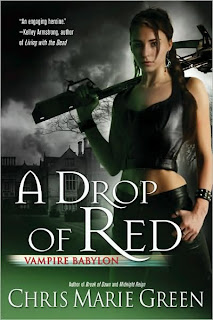 Hollywood stuntwoman-turned-vampire hunter Dawn Madison is tired to the bone and beyond. Along with her comrades-in-arms, she managed to wipe out the Los Angeles Vampire Underground. And in doing so, she uncovered not only her own dark family heritage but also a terrible truth about the man she loves. Now all she wants to do is get to the next bloodsucking community, taking care of business with them, too.

Luckily, when it comes to battling the undead, there’s no shortage of Undergrounds.

When a new one is found in England, Dawn and the team are dispatched to carry the fight from the flash of Los Angeles to the seemingly staid and stolid streets of London. Dawn knows by now how deceiving appearances can be—and she is about to find out that it’s not only the beautiful people of Hollywood who are willing to bargain with evil…
Read an Excerpt: http://www.vampirebabylon.com/excerpt_ador.html

About Chris Marie Green
A long time ago, in a land far, far away (Milwaukee, WI, St. Luke's Hospital), Chris Marie Green (also writing as Crystal Green) joined the world. While moving to Southern California, then Kentucky, then back to California and now Nevada, she amused herself by writing poetry and short stories featuring the ultimate Alpha males--Superman and Indiana Jones. Later, after graduating with a B.A. in English from Cal Poly, San Luis Obispo, Chris decided to become a professional writer.
While she pursued this goal, Chris worked as an eighth-grade teacher, but resigned in 2002 to pursue writing full time. She creates urban fantasies for her Vampire Babylon series, action-adventure stories, and romances. She also loves to read, overanalyze movies, practice yoga , and travel, and details her obsessions on her Web pages, www.crystal-green.com and www.vampirebabylon.com.
About Vampire Babylon
The first book, NIGHT RISING, was released as a trade paperback by Ace in February, 2007, and reissued in mass market format on January 27, 2009. The second trade book, MIDNIGHT REIGN, hit shelves in February, 2008, and will also be reissued in mass market format in July, 2009. The third book that closes out this initial trilogy, BREAK OF DAWN, came out in trade format September, 2008 (mass market reissue date pending). Ace is reissuing each book in the first trilogy to introduce the second trilogy (books four through six, which will be released in trade format).
The Vampire Babylon series uses trilogy arcs to tell one basic story, much like the way JK Rowling used seven books that didn’t solve every plot thread book-by-book to tell Harry Potter’s story. While each individual novel focuses on a central mystery that’s solved by the end, the three books together build character and mythology arcs/mysteries until everything culminates in the third book. Each trilogy repeats this pattern.
Release dates for the second trilogy, which continues the adventures of Dawn and team, are as follows:
A DROP OF RED, Book Four, March, 2009
THE PATH OF RAZORS, Book Five, August 2009
DEEP IN THE WOODS, Book Six, date pending
Website: www.vampirebabylon.com
Posted by Jia Gayles at 10:04 AM

Please do not be offended.

I am wondering if this was done intentionally, or if I am the only one to notice this.

Nice story you got here. I'd like to read something more about this matter. Thnx for giving that material.
Sexy Lady
Busty escort London