The Once and Future Queen... of a Brand New Genre! 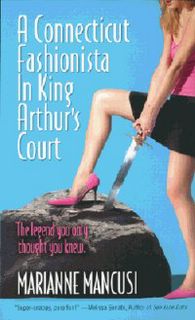 Most people know I’m a huge fan of time travel stories. In fact, that’s what I will be writing myself (in a sense) for NAL. It’s certainly an appealing notion that we can reach into the unwavering thread of our lives and somehow change destiny—all the more so when we get to play out that fantasy through a sexy, fun, romping read (like Karen Marie Moning’s books.) Or a tender love story (like THE TIME TRAVELER’S WIFE.) Or a suspenseful sci-fi tale like THE TERMINATOR.

The problem, though, is that too often a time travel story can feel like a retread. You read the first few pages and immediately the “been there, done that” warning buzzer sounds in your head. That’s why I have an immense amount of appreciation for someone who can take this classic setup and give it a new and unique twist. That’s what caught my eye about Marianne Mancusi’s A CONNECTICUT FASHIONISTA IN KING ARTHUR’S COURT. Marianne’s brand of time travel is fresh. It feels now—only, it’s set waaaaay back in the past (the mythical past, at that!) Honestly, have you ever seen a book with a concept similar to this one?

Once upon a time there lived an outspoken fashion editor named Kat, who certainly was not your typical damsel in distress. But when a gypsy curse sent her back in time to the days of King Arthur, she found she'd need every ounce of her 21st century wits (and pop culture references) to navigate the legend. After all, surviving a magical plot, an evil prince, and a case of mistaken identity--all without changing history or scuffing your Manolos--takes some doing!

Luckily, she's got her very own knight in shining armor, Lancelot du Lac, on her side. The honorable-to-a-fault and devastatingly handsome champion insists on helping her out, even though she's not quite sure she wants him to. After all, shouldn't he be off romancing Queen Guenevere or something? Will Kat manage to stay out of trouble long enough to get back to her beloved café lattes, cosmopolitans and cashmere? And what will Lancelot's forbidden love mean for the kingdom of Camelot?

I’m just hazarding a guess here, but I imagine that when Marianne came up with this concept, she thought it would be great fun to try something totally different—a chick lit time travel. And what she gave us in this charming tale is the classic thrill of the genre: the opportunity to step far back into the past and yet do it with a perfectly modern voice.

Since so many readers of this blog love time travel and paranormal stories, I encourage you to check out Marianne’s book by clicking here:

And just to whet your appetite a bit more, here’s the official press release!

Imagine a Bridget Jones like character spiraling back in time to the days of Camelot. That’s the unique premise behind the latest chick lit offering from Dorchester Publishing. "A Connecticut Fashionista in King Arthur’s Court" (May 2005) combines, for the first time ever, chick lit attitude with a time travel plot. Debut author Marianne Mancusi, an Emmy Award winning television news producer for the NBC affiliate in Boston, pens a sexy, magical, laugh-out-loud romp through the legend you only thought you knew.

"I love the voice of Chick Lit," says Mancusi. "But I felt the same old plotlines about a girl in the city with a bad boss and good shoes were getting old. I wanted to do something a little different."
Connecticut Fashionista features an outspoken fashion editor named Kat, who’s certainly not your typical damsel in distress. But when a gypsy curse sends her back in time to the days of King Arthur, she’ll need every ounce of her 21st century wits (and pop culture references) to navigate the legend. After all, surviving a magical plot, an evil prince, and a case of mistaken identity--all without changing history or scuffing your Manolos--takes some doing!
So slip on your stilettos and clutch your Cosmos tight, as Dorchester Publishing and Marianne Mancusi send you on a wild, wacky, and oh-so-fashionable trip back in time.

About Marianne Mancusi
Marianne Mancusi is a multiple Emmy Award winning television news producer for WHDH-TV in Boston, Massachusetts. She has worked for news stations in Orlando and San Diego. A Massachusetts native, she currently lives in Massachusetts with her British husband Aaron and their dog Molly. She has six other adult and teen chick lit novels under contract with Dorchester and Berkley.

"It might sound like a strange premise for a chick lit novel, but once you pick it up, you won't be able to put A Connecticut Fashionista in King Arthur's Court down."
Kristin Harmel, The Daily Buzz, WB Morning Show

"Excellent writing, biting wit, and a slew of familiar characters will have readers of chick lit laughing and wanting more."
Jani Brooks - Romance Reviews Today
Posted by Deidre Knight at 10:26 AM

What an awesome recommendation. Between you and Nina Bangs' review, I know I won't be complete without reading it. You all are such a wonderful support network for not only newbies but established authors as well. It shows in all the blogs I've visited. I'm impressed.

That one sounds very entertaining. I'll see if it shows up in my local library so that I can check it out. I'm on the lookout for good reads to get me through swim practices. :)

Oops. That anonymous is me who forgot to use the "Other" identity option. lol

I've heard so much about this book! Can't wait to read it. It's definitely on my TBR list.

I DID it!! I found the book! I've only read 4 pages, but I had to at least let you know that all the good buzz was worth it.. You made a sale *grin* Now, how can I get it autographed????
Just kidding. I love the first paragraph, but $400.00 shoes!!! Gadzooks, what does a pair that costs that much look like???

As soon as I heard about that book in RT, I had to get a copy (and I did, as soon as it came out!). Frankly, I love that time travel (an old favorite of mine) is getting a funny, chick spin to it.

I even wrote a chick TT myself, oh, way back when (my first manuscript!) and never bothered to revise it because I thought "Heck, there's no market for this!"

I just bought this book yesterday (as mentioned in my blog) but haven't had a chance to read it yet.

HA! I went to Borders last week and even though the computer said they had it, it wasn't on the shelves. I did, however, score on Awaken Me Darkly and that has been my bedtime read the last few nights:) Fun stuff!
Teri

Its Me again. I finished it today. LOVED it! It was fun, silly, romantic, exciting and I really enjoyed the twist at the end. I KNOW what I'd like her next book to be about, but as she's proven to have a talent for the element of surprise, I guess I'll have to wait and see. *sigh*

Thanks everyone!! CT Fash was so fun to write and it's great to hear people say they enjoyed reading it just as much! :)

There are actual 2 sequels in the pipeline - the next is scheduled for Feb 2007 (long wait, I know!) and is titled "A Hoboken Hipster in Sherwood Forest." And part 3 (no release date yet) is "The Once and Future Queen." I don't want to give too much away, but hopefully the titles will speak for themselves. :)

The reason for the long wait is that I was asked to be part of a different chick litty time travel romance series coming out from Dorchester summer 2006. The series is called Vintage Romance and will be time travels to different decades in the 20th century. Naomi Nash is doing one set in the 1950s and mine is set in the 1920s. Very fun!!

The Vintage Romance series sounds like it'll be tons of fun. Will definitely watch for that!

Read it, loved it, recommend it to all my friends!