GODDESS OF THE ROSE

GODDESS OF THE ROSE is a magical, sensuous retelling of 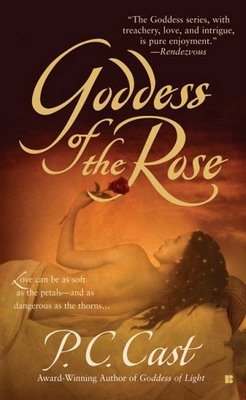 Beauty and the Beast – with a modern slant. Our Beauty, Micki (named after the Mikado Rose), and all the women in her family have a special affinity for roses – their blood, diluted in water and applied during the night of a new moon, makes roses grow spectacularly. What the women don’t know is that they have this ability because they are descendants of a High Priestess of the Goddess Hecate. Hecate is Goddess of Night, Magick, the Crossroads of Man, and of Beasts. She is also the proctrectess of The Realm of the Rose – the place wherein all dreams and magick originate. This realm is guarded diligently by The Guardian, a creature on which the myth of the Minotaur was based. The Guardian swore himself into Hecate’s service for eternity, and in return the Goddess gifted him with the heart and soul of a man, even though he has the body of a beast. But all is not well in The Realm of the Rose. The Guardian made a terrible mistake, arousing the Goddess’s wrath to such an extent that she bespelled him and the realm, and Hecate swore that they would sleep eternally unless the Beast was awakened by a woman who carried the magickal blood of Hecate’s priestess, and was wise enough to see the truth, and compassionate enough to act upon it.Micki does awaken the Guardian and he abducts her to The Realm of the Rose, thinking that she would automatically break the curse placed on the realm and set things to right, but modern woman Micki is a very unexpected kind of High Priestess, and there are forces at work within the realm, both of love and of hatred that might change the shape of dreams and magick for all of eternity unless Micki is brave enough to make the ultimate sacrifice…


ABOUT PC CAST
Award-winning author PC Cast is a dynamic, entertaining orator and an extraordinary teacher. Currently, her realm is in Oklahoma, where she resides with her daughter and spoiled cat.


REVIEWS
Join Mikki on an adventure to outshine them all -- P.C. Cast’s own version of Beauty and the Beast. Fourth in the author’s Goddess Summoning series, it’s very easy to see Ms. Cast’s love and respect for mythology, and it’s even easier to fall in love with characters that I believe may be her best yet. Romance, fantasy, mystery, and adventure are all threads woven together in this beautiful account of a woman who is clearly fated for greater things. An enchanting tale from beginning to end, GODDESS OF THE ROSE truly deserves RRT’s Perfect 10, an award that is exemplified with each word and every page in P.C. Cast’s latest.
-- Amy Cunningham, Romance Reviews Today

I actually just went out and bought this yesterday. It caught my eye and I can't wait to dive into it.

It looks like it's going to be a really great read! :)