Remaking Myself in the Image of Dido 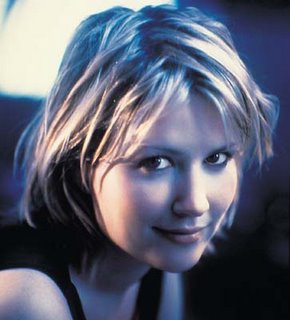 I mean, why not? Look at the similarities, her picture and mine below. If I were British, I might exclaim, "Bloody hell! She IS Dido Armstrong!" Cut! Cut! All of you in blogland are now saying, "Has Deidre gone round the bend?" (and intoning a perfect British accent, no doubt.) "Has she spent too many hours answering agency email and reading submissions and working on her book?

Well, the inspiration here is multi-fold. First of all, there's no word I'm more likely to misspell than my own name. How pitiful is that? Perhaps it's the speedy flex of the fingertips, perhaps it's my familiarity with my own name, but I am MOST likely to type: Diodre (which sounds a lot like "Bad odor") or Dido. Yes, Dido. Actually, I believe it's Didor, at which point I catch myself and start backtracking to delete. But today the high irony of the Dido Typo (nice inner rhyme, huh?) hit me.

Dido is the daughter of a literary agent, and was herself a literary agent still when discovered by Arista. So, I think remaking myself in the image of Dido is a perfectly reasonable plan. In fact, to put a PARALLEL series spin on it, perhaps she's the thin, young British alter-universe of ME!

Seriously, what if I just changed my name to Dido? Why not, really? In an era of memoir ad-libbing, surely I can acquire any ole monicker I want--even someone else's.

Just something to think about. Then again, I could drop Knight and simply be...

Um...are you feeling okay? lol Hey, if you can't be nutty on your blog, where can you be?

LOL. Thanks for a great laugh, Deidre.

ROTFLMAO!!! Thanks for the laugh to end my night, De! LOL! Personally, I say do it. Go for the single name thing. It gives you a presence...plus will make book signings that much easier when the time comes ;)

I constantly type Muareen or Maurene or other variations... most often I catch it before pressing send... not always...
Mareuren

I don't think i wanna be Jake, thank you.

I have a hard enough time getting people to pronounce "Jaci" like JC and not like "Jackie" to have to deal with Jake.

See what you started?

Hm, as your husband I gotta say I kind of like the "Dido" idea... pretty sexy there, hon. But as your business partner, I would have to point out the high degree of legal liability to which we'd be opening ourselves by adopting, or attempting to adopt, a public persona that is already in use.

On the other hand, as a fellow writer (sometimes, in my case ;-), I appreciate the literary allusions implicit in the name. (Well, I guess we should actually give the credit for that to Mr. and Mrs. Armstrong back in the 1970s in England.) My assumption here is that the "Dido" to whom the name refers would be the noble, heroic figure the Carthaginians embraced as their mythical progenitrix, and not the Dido of the Aeneid, who kills herself when Aeneas dumps her to go off and become the ancestor of Romulus and Remus. As long as we've got that straightened out, I'm good to go.

And as your partner in far more than business and art, I think of all the different instances of Dido's music appearing in our lives. One of the best of these, for the FBH (folks back home), was the time in 2000 when we tried to put on the brand-new Dido CD, only to have our two-year-old insist that we turn it off. "But you'll like it," Mommy told our little girl, who covered her ears and said, "I don't wanna like it!" Maybe you can write a serious agent blog entry some time with the title, "What to Do If an Editor Says, `I Don't Wanna Like It!'"

Well, I have you all beat. I usually type my name as Dincy, which people have pointed out to me sounds an awful lot like Duncy....

Oops, there's another one. And I hate the name Sydney. Makes me think of Woody Allen.

Your name is so beautiful I'd vote you leave it alone. But you could always publish under a poorly hidden pseudonym aka Nora Roberts/JD Robb and call yourself just "Knight". I thought of D. Knight or De Knight but that sounds like you're a gangsta rappa!

This infuriating typo slips through unnoticed before I get a chance to correct it... result?
This person exists at Yahoo, MSN, Hotmail...
Sad thing is that I actually know this person!

My word verification is fantastic.
fasnxgo
is that a word? If it isn't it should be.
It could be a substitute word for fascinate if you wanted that twice in one para ;-)