Twitter fever has a hold on Deidre Knight! Get daily updates on what she's up to by visiting www.Twitter.com/DeidreKnight.

The Knight Agency team is also getting in on the fun. You can find out what's going in the agents' world by visiting www.Twitter.com/KnightAgency

The war is finally over. But Wren's life is in tatters. The only living offspring of the notorious Drakken Warlord, her genes could very well start a new dynasty of terror. And the Coalition can't have that.She alone holds the key to finding a legendary treasure. Having seen enough bloodshed, shy, petite Wren vows to destroy it before anyone, Drakken, Coalition or Earth, can get their hands on it - but she'll need help.The Drakken's ruthless evil turned Aral toward the Coalition years ago. War is all he knows, until he finds passion and love in the most unlikely of women - the Warlord's Daughter. But will trusting each other with their secrets risk not only their hearts, but their lives?
Click here for an excerpt!

Watch the book trailer!
ABOUT SUSAN GRANT---RITA award winner and NY Times best-selling author Susan Grant loves writing about what she knows: flying, adventure, and the often unpredictable interaction between men and women! When she’s not writing science fiction-romances, Susan pilots 747 jumbo jets to China, Australia, Europe, and many other exotic overseas destinations where she finds plenty of material for her novels.

REVIEWS----"It was SO good. It was wonderful to watch Wren's growth from an uncertain scared young lady into a determined heroine strong enough to be a battlelord hero's woman."-- Kathy's Review Corner

"Grant’s forte is her superbly-drawn and well-developed characters. Her heroes are just the most gorgeously-drawn and sensitive men." --JaceScribbles

Website: http://www.susangrant.com/ & http://www.the-borderlands.com/
Posted by Jia Gayles at 11:51 AM 2 comments:

The final cover for the second book in the GODS OF MIDNIGHT series has arrived! Behold River's story, RED KISS. Not bad looking, eh? RED KISS will be available on a bookshelf near you this June, but you can get a head start by pre-ordering via Borders or Amazon. 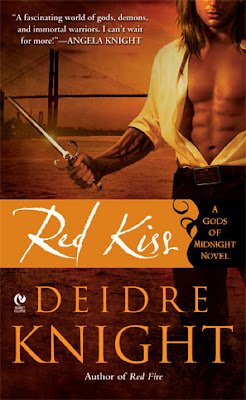