UPDATE: The winner of the Real Life Hero Contest is traveler!!!! Congrats!!! Please email your physical addy to contests(AT)knightagency.net

During Deidre's research for the Gods of Midnight e-novella, RED BLOODED, featuring blind Iraq veteran Dillon Fox, she stumbled upon the story of real life hero, Bryan Anderson. In 2005, Bryan lost three of this limbs in a IED (Improvised Explosive Device) attack. The soldier now has a flourishing public speaking career and has appeared on television and in the movies. Currently, he's working on writing a book about his experience.

**Don’t forget to check out the Real Life Hero Contest! Win up to 15 TKA books featuring real and fictional heroes! Details below.**

In the world of romance writing, heroes can morph into werewolves, glamour unwitting victims with their sparkly skin and battle nefarious dukes in dawn-lit sword fights. But, with the turn of the final page, reality comes calling. Though the castle in the Scottish highlands might not have translated to suburbia and shapeshifters aren’t shopping at the local Wal-mart, there is something both the world of romance and the real world possess – heroes. One of those real life heroes is Iraq War veteran Bryan Anderson, a triple amputee and Purple Heart recipient who is working on adding the title of “author” to his resume. 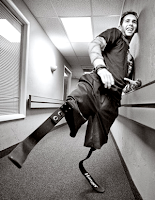 Bryan’s story begins in his hometown of Rolling Meadows, Ill. As a teenager, he was a gymnast competing at the state level and excelled academically. He went on to work as Ground Crew Chief at O’Hare airport for American Airlines before enlisting in the Army. It was during his second tour of duty in October 2005 that an IED (Improvised Explosive Device) caused a catastrophic injury, severing both his legs and left hand.

After returning from Iraq, the soldier spent 13 months undergoing more than 40 surgeries. As he recovered, his mind was on more than just figuring out how to walk again. “I wanted to figure out what I could and could not do, and in doing that – I figured out there wasn’t a whole heck of a lot that I can’t do,” he says. “I mean, I can still climb trees if I want to.”

True to his word, Bryan can still climb trees along with a whole other host of activities many full-bodied people—as Bryan calls them—find daunting, including; snowboarding, wakeboarding, driving race cars, rock climbing and riding a bicycle 110 miles using hand cranks. 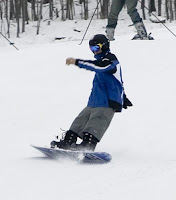 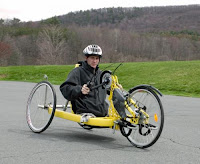 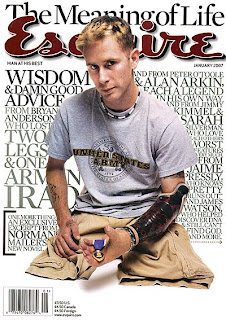 As the national spokesman for Quantum Rehab, a division of Pride Mobility Corp., Bryan travels the country to deliver his message of perseverance and self determination. Last year, Bryan made over 35 appearances at various rehab centers and events. He’s also managed to add a budding acting career to his busy schedule. His credits include the CSI: NY episode, “DOA for a DAY,” and an appearance in the Golden Globe award-winning film, The Wrestler. He was also immortalized in his own Marvel comic book, featured in Esquire Magazine twice, including a cover story, and was one of ten soldiers profiled on the HBO special, Alive Day Memories: Home from Iraq.

Bryan relishes life, and greets each new day as a gift, and a challenge. He receives emails from people all over the world who have been moved by his story. It’s his desire to continue to inspire people to live to their fullest potential that led him to finally putting his story in printed form. “I hope that the kind of message [I send] is just because something happens doesn’t mean life is over,” he says. “I hope by [giving my all] that people can take something from that and apply it to their own life.”

So, though Bryan doesn’t grow fangs and avoid sunlight at all costs, he does have something important in common with his romance hero counterparts. He makes the impossible possible. He pledged to safeguard his country, and in carrying out that promise survived and thrived through an injury that would have easily devastated many for life. Though we will always love our Alpha heroes and hold fast to our dog-eared Quinns, Showalters, Roberts, Wards and Coles – a real life hero like Bryan shows us how to create magic in our everyday lives.

Message from TKA: We are sponsoring a “Real Life Hero” contest on both this blog and TKA's blog. In the comments*, tell us about a real life hero who has inspired you, and we will enter you in a mega-book giveaway, including up to 15 books featuring both real and fictional heroes. The winner will be randomly drawn and announced Friday morning, May 21st.
*You can leave your comment here on Deidre's blog or on The Knight Agency blog, and it will be counted in the contest. The winner's name will be posted on both the Deidre Knight and Knight Agency blogs.
Posted by Jia Gayles at 10:22 AM 3 comments: 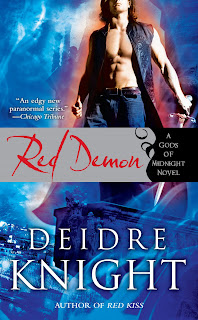 To celebrate the June 2010 release of her latest Gods of Midnight novel, RED DEMON, which features steampunk heroine Juliana Tiades and her immortal Spartan love, Aristos Petrakos, Deidre Knight is giving away a $100 gift certificate* for Cathrinette Rings. Five (5) randomly drawn winners will also win a signed copy of RED DEMON. Read on for details!

HOW TO PLAY:
1. Find the answer to the ten (10) questions below. All answers can be found online through searching Deidre’s sites (www.DeidreKnight.com and www.GodsofMidnight.com), as well as using various search engines.
2. Email answers to Contests@DeidreKnight.com.
3. The entry will be automatically entered in a random drawing.
4. *If you are drawn as the winner, the amount of your gift certificate will be based on the number of questions you answered correctly. Each correct answer is worth $10.00; therefore, the Grand Prize winner will receive a gift certificate of $100.00 if all ten (10) questions are found to be answered correctly. For instance, if the selected entry answered ten (10) questions correctly, the full prize amount of a $100.00 gift certificate would be awarded. If the selected entry contained only nine (9) correct answers, a $90.00 gift certificate would be awarded, five (5) correct questions, $50.00 awarded, and so on. The minimum amount of the gift certificate is $10.00.
5. After the winner is drawn, five (5) additional names will be drawn to each receive a signed copy of RED DEMON.
6. The contest begins at 12pm ET on May 13, 2010, and ends at 11:59pm ET on June 30, 2010.

THE QUESTIONS:
1. In Greek mythology, what was the name of the god of beauty and sexual love?
2. Find the dirigible located on Deidre’s website, www.DeidreKnight.com. What is the number on the image?
3. What is the name of the sculptor who created the notorious Bird Girl statue, once located in Savannah’s Bonaventure Cemetery?
4. Name all seven of the immortal Spartans in the Gods of Midnight series.
5. On the slopes of what mountain are the ruins of the Temple of Apollo at Delphi located?
6. What is Aristos’s nickname for Juliana? (Hint: Check out the RED DEMON excerpt on www.DeidreKnight.com)
7. Which of the following bodies of water does not border Greece: the Sea of Crete, the Mediterranean Sea, the Ionian Sea or the Caspian Sea?
8. The steampunk genre is heavily influenced by what two authors, known as the “Fathers of Science-Fiction?”
9. What is the capital city of Greece?
10. What is the name for a creature, like Sable in the Gods of Midnight series, who is half human and half horse?

Click here for the official rules and regulations on eligibilty, submissions and awarding of prizes. This contest is open to U.S. and Canada, as well as international residents.


**If you have any questions about this contest, please email the contest coordinator at Contests@DeidreKnight.com **
Posted by Jia Gayles at 12:58 PM 8 comments:

Deidre has a special treat for fans of the Gods of Midnight series! A special novella, RED BLOODED, is now available featuring Dillon Fox, a blinded Iraq war veteran who joins the Shades to help the Angels fight a vampire clan. This is the perfect way to get yourself ready for RED DEMON's big release this June. See details below!

Cover Blurb: Dillon Fox, sightless after a tour of duty in Iraq, is called to Savannah, Georgia, to help the Shades, a powerful group of paranormal hunters. His friend Mason Angel, a leader of the Shades, needs Dillon's help to take down a vampire clan. Once Dillon embarks on the mission, one woman stirs something inside him that he thought long dead. But as Dillon starts to fall for the sexy and charismatic female vampire, will he have to choose between love and duty?

RED BLOODED is currently only available throught the Sony bookstore (Sony downloads can be read with the Sony Reader or via your personal PC). Later this week, links will be added for Borders and Barnes & Noble as they become available.* Stay tuned to this post for buy link updates!!

*Due to ongoing negotiations between Amazon and the publisher (Penguin), the Kindle version is not expected to be available in the immediate future.
Posted by Jia Gayles at 2:46 PM 3 comments: