If DVD Players Were iPods, How Nerdy Would I Be? 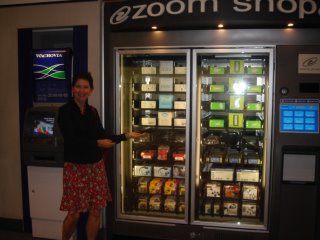 We’ve had the iPod inventory, or at least the snapshot inventory, thereby proving that my unit is not, in fact, a redneck one. But I keep waiting for the day when I can download all my favorite DVD movies and shows onto a single device—already, I far prefer just playing something I’ve TIVO’ed, rather than going through the rigamarole of loading a new disc. So imagine the day when we’ll have our little porto-units with SIX FEET UNDER, all five seasons, and Roswell seasons 1-3, and so forth. It will be a true testament to my own personal geek factor.

I like shows I can become obsessive, or the very least thorough, about. In other words, I want something where I can see every show, discuss those episodes knowledgably, and more important, I want to look forward to it every Friday night. What’s so great about Friday night, you ask? That’s usually when Sci-fi Channel has rocked. For a wonderful while it was the Farscape slot. Now it’s the Battlestar Galactica slot (BSG.) Life is plenty exciting and hectic for me; I travel the world, write novels, and (most important of all) raise two amazing daughters. Life is never, ever dull for Deidre. That said, there’s something really great about a lift on Show Day. Like Game Day, Show Day is that key day of the week when you know your fave show will air. So, about two pm or maybe six or maybe even nine am, depending on how excited you are, you will think to yourself, “Yes. Today is the day.” The world gets a tiny fraction brighter.

How many shows will I follow? some concerned folks may be wondering. Never more than two or three. At present, BSG is on hiatus until January, so I’m only watching LOST and OFF TO WAR. The latter has been an eye-opening look at one Oklahoma reservist battalion during their tour in Iraq. What makes the show even more interesting is that it also follows these soldiers’ families back home. There’s no editorializing, but rather it’s just a very frank, emotional look at what these soldiers experience while in country. I highly recommend catching this on Discovery Times.

But back to the iPod theory. I believe we’ll have movie iPods in the next five to ten years. And so, what would my play list include?


The list goes on and on… I always find it troubling when people ask me my favorite movies, because there are always so many of them. But the above would be an iMovie load-up that would make me very happy.
Posted by Deidre Knight at 2:08 PM

I love the new Battlestar Galactica (I used to love the old one too, but I've decided never to admit that in public again *wry grin*). Sadly, I'm still living in the Dark Ages and don't get cable, so I've only seen it on those rare occasions when it was shown on broadcast TV. The first season on DVD is at the top of my Christmas list!

The video iPod is out, so your fulfilled dream might not be far behind!

I think it would take me years to get all the stuff I'd want on it, but Lord of the Rings, Pirates of the Carribbean, Galaxy Quest, and Princess Bride would have to be on it. Oh, and Monty Python and the Holy Grail.

Another Cameron Crowe fan, eh? How about Say Anything? That's got to be my fav of his. I'd also have The American President and my fav 10 movies I put on my iFAQs page. BTW--if you haven't seen Mumford (a somewhat-unknown gem) you might put it on your TBW (to be watched) list. :)

Natalie, I can't find anything video for iPod--I'm talking about for the tv. they don't have anything like that, right? Hubby has the new iPod that shows videos, but I'm talking the Master Device of compact television viewing. :)

Ellen, love BSG!!!!
Gina, huge Cameron Crowe fan, and yes, SAY ANYTHING must be on the list, as must SINGLES.

In fact, I'm watching Desperete Housewives on my iPod as I write this.

It's a bit of work, but Tivo just announced they're going to support the iPod early next year...

Would someone please post a link to this video iPod? I can't find anything about it on the ipod.com site. Do you just mean the kind of regular iPod that shows video? Or is this some larger unit? Need to know more! D

Deidre...The new iPod will play videos. You can read about it at Apple.com. Apparently you can purchase videos through iTunes...or you can ask Pam how she does it. ;)

I guess I need to see SINGLES. I'll put that on my TBW list. I need a reward once I get my GH entries in.

And if you want to convert TiVo video for the iPod (or PSP, or Palm, etc) see http://www.tvharmony.com/main/products.php

And for TiVo resources: http://www.livejournal.com/userinfo.bml?user=tivolovers

I'm such a technotard. I still use a VCR and DVD player.

Though we did just order a DVR so we can at least tape shows on Dish Network.

No, really, I do write all day too. And work part time.

Yup, I use TV Harmony to download Tivo and convert to iPod - takes forever though, so be patient. I'm watching last night's NCIS this morning - quality is fairly good.

And right now Apple's iTunes sells Desperete Housewives, Lost, and a couple of children's shows for $1.99 an episode. The qulaity is escellent.

I also use PD-DVD converter (www.pqdvd.com/dvd-to-ipod-video-converter.html)to convert some DVDs - and once you install ALL the bits and pieces, it works really, really well. I converted a 2.5 hr movie (Pirates of the Caribbean) in 30 minutes.

However, if you find you using the iPod to store many videos, you'll really want to get the 60G version. So you have LOTS AND LOTS of room...

I guess I really SHOULD come into the current techno age--hmm, maybe kicking and screaming I'll get there!

Deidre, I did mean that the new iPod plays video (an advance over the one that shows still photos), and as mentioned, iTunes sells TV episodes. So I MEANT that maybe soon you'll be able to put all your TiVo and DVD collection on a hand-held device.

Then I read the other posts and see you can already do it! I'm halfway between a technotard and a geek, I guess. LOL

So I'm thinking the only limitation is space. Oh, and the fact that my TiVo unit and my computer aren't connected.

Natalie -
TivoToGo (on the Tivo website), a wired or wireless connection to your home network and you've got them connected.

That way we can keep our favorite TV shows forever on our computer, at least.