And you thought your Valentine's Day was bad? 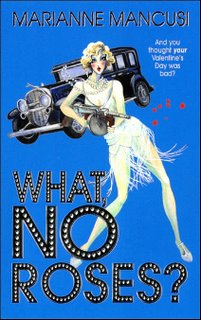 AND ALL THAT JAZZ

Unless Dora Duncan can stop it, it's going to be another St. Valentine's Day Massacre. A year ago, her (now ex) boyfriend Nick stood her up at the worst possible moment. That was when she gave up important TV reporting for stories like "Too Stressed for Sex." And though such clips have a certain relevance, things have been a whole lot quieter. Too quiet. Until now.

Now she's gotta go back in time (don't ask!) and stop that very same Nick from messing up the time-space continuum. She has to travel back to a place where everybody speaks easy and cuts a rug-and this Chicago ain't no musical. Here, there are tommy guns and torpedoes, guys and dolls, gin joints, flappers, stoolies, rats and a whole lot more; and prohibition means anything but no.

Her first chick lit novel, "A Connecticut Fashionista in King Arthur's Court" was called "a sparkling debut" by Publisher's Weekly. And Romantic Times magazine awarded four Stars to her upcoming 1920s time travel "What, No Roses?", pronouncing it "fast, funny and as bubbly as bathtub champagne."

In addition, Marianne has six other adult and teen books under contract, including a teen comedy vampire series from Berkley called "Boys that Bite."

REVIEWS
Mancusi’s witty, tongue-in-cheek remarks and sprightly dialogue make for a joy ride of a read with an ending that’s as surprising as it is original. 4 stars – Romantic Times

Ms. Mancusi’s sense of comedic and dramatic timing is dead on... She masterfully blends a time in our history with an idea from her incredible imagination. – Once Upon a Romance