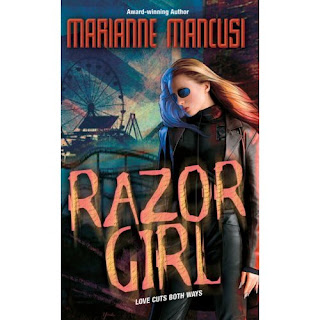 Molly Anderson is not your average twenty-one-year-old. It’s been six years since she and her family escaped into a bunker, led by her conspiracy theorist father and his foreknowledge of a plot to bring about the apocalypse. But her father’s precautions didn’t stop there. Molly is now built to survive.

Yes, Ian Anderson’s favorite book gave him ideas on how to “improve” his daughter. Molly is faster, stronger, and her ocular implants and razor-tipped nails set her apart. Apart, when—venturing alone out of the bunker and into a plague ravaged, monster-ridden wilderness—what Molly needs most is togetherness. Chase Griffin, a friend from her past, is her best bet. But while he and others have miraculously survived, the kind boy has become a tormented man. Together, these remnants of humanity must struggle toward trusting each other and journey to the one place Molly’s father believed all civilization would be reborn: the , where everyone knows it’s a small world after all.

When it comes to writing, award winning author Marianne Mancusi likes to play the field. From time travel comedies to kick butt speculative fiction romances to a Buffy’esque vampire series for teens, she’s published eleven books in three years, in a myriad of genres and styles.

In addition to writing, Marianne is a multiple Emmy award winning television producer, currently working for the nationally syndicated women’s lifestyle show Better TV. A native and graduate of ’s of , she currently lives on ’s . (But has NOT become a Yankees fan!) In her spare time, Marianne enjoys clubbing, cosplay, cheesy horror movies (especially those featuring zombies!), her dog Molly, and videogames.

“Opens with danger and will grab your interest immediately. Stellar!”
--Huntress Reviews

"Marianne Mancusi has returned with an edgy all-new tale, Razor Girl, filled with fast-paced action and a heroine strong enough to mold her own destiny."
--SF Scope