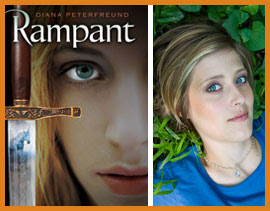 Give us the elevator pitch. In short, what's RAMPANT about?
DIANA: RAMPANT is a young adult fantasy adventure about killer unicorns who can only be hunted by virgins descended from Alexander the Great. It's set in modern-day Rome, after it's discovered that unicorns are not extinct after all, and once again pose a threat to people. The teenaged heroine, a born unicorn hunter, is sent to Rome to train in the crumbling nunnery where the women in her family lived for centuries, but things there are a lot more complicated and dangerous than she could have imagined -- especially once she meets a handsome art student.
Did you have any unfortunate unicorn incidents as a child? *side-eye* Why pick on the good guys?

DIANA: Who says the unicorns are good guys? The unicorn legend is actually much richer and more varied then the things you see in the average child's coloring book. There are unicorn legends from all over the world, like the kirin of Japan (maybe you are familiar with the beer? Next time you have one, check the label. It's not a dragon, it's a unicorn!) There was also a middle eastern legend about a unicorn called a karkadann, a vicious, maneating beast that some stories claim was the famous steed of Alexander the Great.

The unicorns in my book aren't necessarily "good" or "bad" -- they're wild animals, like sharks or tigers. Which is part of the problem. Back in the day, we humans killed predators. Now we hit 'em with sedative darts and relocate them to wild areas where they can be safe and free.How do magical hunters fit into this brave new world, a world where it's also uncommon to tithe your daughter to a nunnery at birth?
So, the warriors have to remain virgins to retain their fierce unicorn butt-kicking abilities... Not so easy for teens hopped up on hormones. Why did you decide to tackle the oft-debated subject of teenage sexuality, specifically female virginity?

DIANA: Unicorns and virgins go together like vampires and blood, like werewolves and the moon. It's an integral part of the legend, and the topic of developing sexuality is a natural one for young adult literature. I was abstinent as a teen (and yes, my school had awesome comprehensive sex ed), and I remember being taken aback by the people who assumed that there had to be some "reason" I was "saving myself." "I don't want to" or "I'm not ready" weren't viewed as valid reasons.
Luckily, even as a teen I knew that was dumb -- of course they were valid reasons! Every bit as much as a religious restriction. I wanted to write about the different reasons teens might choose to wait, and how they are all valid -- even if the reason is that they want to be able to hunt unicorns. It was important for me to show right from the start that though it is Astrid's virginity that allows her to be a unicorn hunter, the reason she is not sexually active is because she is not ready and does not wish to have that experience yet.
There are thousands of years of history of institutional celibacy, and even institutional virginity, from which to draw to create my idea of the hunters. Nuns, priestesses, even the vestal virgins of ancient Rome are all orders that included vows or chastity or virginity as a basic part of their makeup. I decided that the unicorn hunters would have organized themselves, once upon a time, as an order of warrior nuns, much as in the middle ages, the Knights Templar were an order of warrior monks. Of course, that was a lot easier to do in times where everyone you might put in your order was European and Catholic, and living in a time where it was no big deal to tithe your daughter to the church from an early age. In the modern milieu of my book, however, the order is defunct, and those born with the ability to be unicorn hunters must rediscover its secrets within its ancient monastery's crumbling walls.

Why do you think RAMPANT, and young adult literature in general, has such a mass appeal to both teen and adult audiences?
DIANA: I hope it does! I think RAMPANT will appeal to both teen and adult readers of fantasy and paranormal romance. It's really not that different than reading one of Deidre Knight's books. The same conditionsapply: a richly imagined world, a fast-paced adventure, high stakes, a forbidden romance, and a full cast of characters you care deeply about. The only difference is that the main character is a few years younger than most of Deidre's (many years younger than her immortal Spartans!).

But the nice thing is that all adults were once teens, and the issues are familiar to them: trying to figure out how to control your own destiny, worrying about disappointing your parents or whether your parents' plans for you are the correct ones, finding and keeping friends, falling in love. These are universal issues. One of the nice things for me about writing young adult is that my teenage protagonist is experiencing a lot of these things for the very first time, with all the wrenching emotional struggle that entails.

For more information on Diana, visit www.DianaPeterfreund.com!
Posted by Jia Gayles at 5:52 PM

Thanks for this post! i really enjoyed reading it!!!