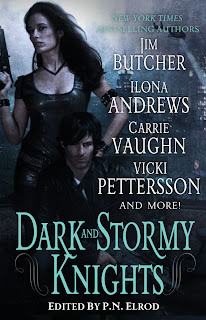 Here's the scoop on DARK AND STORMY KNIGHTS from Jessica Moyer at Booklist:
Elrod has collected nine original stories by the modern masters of urban fantasy; an anthology that will both thrill fans and serve as a nice introduction to an increasingly popular genre. Several of the stories are set in the authors' series worlds but feature minor characters; Jim Butcher's “Even Hand,” for example, uses the landscape of the Dresden Files series but focuses on Chicago Mob boss Johnny Marcone. Carrie Vaughn's “God's Creatures” features Cormac, who must track down a rogue werewolf. All the stories feature knights of one kind or another, but none is the conventional knight of history. The entire collection is strong, but the two highlights are Rachel Caine's “Even a Rabbit Will Bite,” about two old foes, and Shannon Butcher's “The Beacon,” in which a reluctant hunter must decide the fate of a small girl. With some of the biggest names in urban fantasy contributing stories, this anthology will be an instant hit with fans.
Deidre's story in the anthology:
In "Beknighted," a talented puzzle maker's dreams are haunted by visions of a captive knight. Anna's incessant attempts to solve the intricate puzzle required to free him fail miserably – until a dark patron brings her the key to unlocking her knight's supernatural prison. But freedom comes with a high price, and the cost may be both the lives of Anna and the nameless man who mesmerized her from the shadowy confines of a dream.
Posted by Jia Gayles at 12:46 PM

This is for all the writers out there who have a knack for creative writing. So, if you have what it takes to claim the winners 'prize' money, which is $100, drop us an email with your 'short story submission’ composed within a 550 word limit. The last date for submission is 10th August 2010.

For registration, queries and for all the insiders’ info, do check the provided link - http://bit.ly/short-story-contest-2010

This article is really the one that I needed. I really learned a lot by reading the whole content. Thanks for this.

Thanks for the great info. I’ll be implementing much of this soon!

It’s been a pleasure reading your post. I have bookmarked your website so that I can come back & read more in the future as well. Please do keep up the quality writing.

Nice effort, very informative, this will help me to complete my task. Thanks for share it keep it up.

great) liked everything very much) keep it up and dont stop)

great) liked everything very much) keep it up and dont stop)

Thanks for providing such a great information here.

Hello my friend! I want to say that this article is awesome, nice written and include almost all vital info. I would like to see more posts like this.

Thanks for the interesting interview

Thanks for the great info. I’ll be implementing much of this soon!

I appreciate that the highly anticipated DARK AND STORMY KNIGHTS anthology has finally been released. By the way, nine of today's hottest paranormal authors bring us all new thrilling stories of supernatural knights. We'll write a review on this, just follow paper writing services to get in touch with us!

I would like to thank you for the efforts you have made in writing this article. I am hoping the same best work from you in the future as well net worth