So, have to brag and boast that Robin is a star TKA client. What a pretty cover, too! Have several of her covers framed here at the office. Go out and get your copy today (click on the cover to buy the book)!

With the world of Llandrana threatened by encroaching evil, the 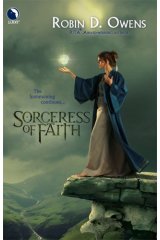 Sorcerers must do the unthinkable—Summon an outsider to stop the insidious Darkness slowly taking control of their land and poisoning the Sorcerers themselves.
Arriving in Lladrana, grad student Marian Harasta is stunned to find herself the center of a dispute among Sorcerers who want to augment their Power with her own. She must quickly learn her new magical Powers – and decide who she can trust in this strange land. She has prayed for a miracle to save her brother – could Lladrana offer that knowledge, and can she somehow return to Earth with it?

She knows she must offer the Sorcerers something in exchange, and ridding them of the Evil Sorcerer is what they want, but how will she fare in her first magical duel?
With unexpected help – and unexpected betrayal – Marian must determine where her true fate lies.

ABOUT ROBIN D. OWENS
Robin D. Owens has been seriously writing longer than she cares to recall, but is very happy with how her writing career is proceeding. She was named the Writer of the Year by Rocky Mountain Fiction Writers in 2004, and 2003 Writer of the Year by the Denver Area Science Fiction Association. Robin has been the librarian, contest co-chair, and President of Rocky Mountain Fiction Writers. She has given seminars at Pikes Peak Writers Conference, the Colorado Gold Writers Conference, and Romance Writers of America as well as other groups.

REVIEWS
Marian is a fantastic heroine, both fiercely intelligent and independent, as well as willing and able to stand up for herself and what she wants. This book will enchant readers who enjoy strong heroines.
– Romantic Times