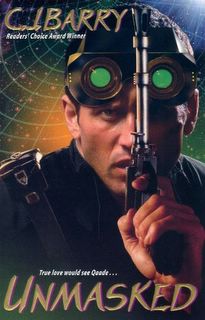 
C.J. Barry is on tour right now with our Out of the Blogosphere, and lucky for me, I’ve been reading her latest book, UNMASKED. This woman can write. She had me hooked right from the get go, and of course since you all know I’m Nerdy Sci-fi Gal, of course the idea of a sexy intergalactic pirate had me at hello.

Honestly, I started the book before bed one night, and the next day kept seeing the book on my nightstand, which would give me this little rush of expectancy. Then, when I got to the following description of the hero and his band of pirates, you can only imagine how hooked I was:

“…the Ghost Riders of the Dead Zone. They are the most daring and elusive pirate force operating in the quadrant….very smooth, very good. And they always wear black.” Oh, la la, you’ve got a love a pirate in black.

I heartily recommend this one!


UNMASKED by C. J. Barry
Love Spell (Dorchester Publishing), June 7 2005
To the merchants he plunders, he's the Ghost Rider of the Dead Zone. To sector law enforcement, he's a wanted pirate. To the slaves he rescues, he's the savior, laghato. To one determined female, Qaade Deter is serious trouble. Torrie Masters had heard of the legendary raider, but she'd never expected to encounter him. Nor would she have expected that beneath his black mask lurked an enticing man destined to challenge her in ways she couldn't shoot her way out of. But a great threat has emerged-one that's left no choice but for them to join forces. Entrusted with the fate of thousands, Torrie has discovered Qaade's impossible dream. Only she has the power to help him. Only she has the power to see him UNMASKED.


About C. J. Barry
Award-winning author C. J. Barry is an earthbound wife and mother of two who lives with her family and cat in a small town in Upstate New York. While her imagination wanders far into the universe to conjure up wondrous worlds and miraculous gadgets, she is foremost a storyteller whose tales chart the infinitely fascinating workings of very human emotions and relationships. She is a member of the Romance writers of America, the Fantasy, Futuristic & Paranormal chapter, and President of the Central New York Romance Writers.

"Applause for this gutsy tale that steals your heart. Barry's best, simply her best!" -Deborah MacGillivray, The Best Reviews 4 1/2 STARS!!

"This awesome book roars out of the starting gates and never looks back. Along with telling social commentary, it is chock-full of danger, adventure, and romance-a terrific keeper!" -Romantic Times Magazine

I said it on another blog...this book sounds great! Hehehe got to agree about "a pirate in black" }:)

I loved CJ's UNLEASHED. I've been meaning to pick this one up too... I try to support any author who got her start in e-publishing, particularly CJ, whose first book was from NCP:-).

This was my favorite of CJ's books, and I loved them all, so that's saying something!