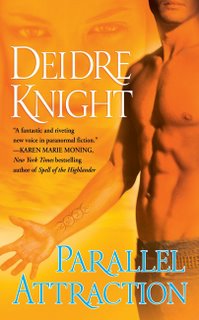 Okay, I'm becoming silly author girl with every passing day. It's less than two months until PARALLEL ATTRACTION comes out now, and so all these really thrilling "firsts" are happening. Lovely Jax at Romance Divas gave me my first review, which kept me floating for weeks. I kept meaning to post it here, but it came in when I was getting ready to leave town. I do have it on my author message board attached to my site.

Now this! A five blue ribbon review from Romance Junkies! Dorine gave me a fabulous review!

ROMANCE JUNKIES REVIEW:
Catchy Snippet: Do aliens exist among us? After reading this debut paranormal futuristic novel, you may believe it’s true. For a sensual journey between two people meant for one another, I highly suggest you try this one. It left me yearning for more and the paranormal elements were mesmerizing.

Jared Bennet, exiled alien king, tests his protectors’ patience once again. Independent and strong willed, Jared refuses to be revered as a king, and risks everything against his advisors’ mentoring. Focused on leading a secret rebel force on Earth, he is fighting for his people’s survival. Jared has no time in his life for a family. However, his people need their king to choose a lifemate and produce an heir. Even Jared doesn’t know the true reason for his resistance to their wishes.
The scope of what it all means begins when he meets human Kelsey Wells.

Kelsey Wells’ scientific mind can’t completely wrap around the events that transpire when she returns to her beloved homeland in Wyoming. Her geological research has brought her back to Mirror Lake in the mountains and the scene before her can’t be real. A fiery energy lands before her and then takes the shape of a man. His searing touch fills Kelsey’s body with the most unbelievable sensations. Then he’s gone.

Can Kelsey’s investigative nature reveal the truth? Once she knows what really happened between her and the mysterious entity, will she be capable of facing the greatest challenge of her life?

Jared and Kelsey’s lives are intertwined in an intriguing plot and they can’t comprehend it at first. Each chapter reveals another piece of the puzzle and I bet you can’t read just one! PARALLEL ATTRACTION brings a completely new meaning to what goes bump in the night and what it could be. Talk about shivers! This alien can invade my world any time!

Debut author, Deidre Knight, immerses the reader in a world that’s believable, fascinating, and extremely sensual between two people who meld into one as their love escalates. The sensuality builds to a crescendo, the plot plummets your emotion then brings you back, while bating your wishes for more at the end. Completely mesmerizing, PARALLEL ATTRACTION leaves you hoping for more.

Watch for PARALLEL HEAT in October 2006 and PARALLEL SEDUCTION in April 2007.

Now, in non-book related stuff, I've just got to share that for the past week I've had a double ear infection. Um, am I like three? Four? I haven't had an ear infection since childhood, and the really great part is that my antibiotics are gone and I STILL have the infections. Got to talk to the doctor (also my next door neighbor) tomorrow. Was sorely tempted to walk down the end of my driveway today and ask if she could look into my ears. That's smalltown life for you!

Meanwhile, now my seven year old has a temperature of 103. Sigh. I just want us all to be WELL!

I posted some Wyoming pics on the TKA site (waves at Lisa! I didn't forget you, dahling!)
hugs, D
Posted by Deidre Knight at 9:14 PM

Congratulations on the great review, Deidre! And sorry about the ears. I'm horribly ill myself at the moment, so I sympathize (well, I would regardless).

Oh Deidre, I hope you and yours are better soon! I had my *first* ear infection when I was in my 30's. It was amazingly painful. Take care. Eat garlic.

Wonderful review!! Then again, it's a wonderful book!

Yuck on the sickness floating around your home. Hope everyone feels much better very soon!

CONGRATS on the review! How awesome. And sorry to hear you're sick...ear infections are the WORST. Right up there with toothaches! Praying for quick healing for you!

Ick on the ear infections! TAke care of you and your family.

Great review!!! Hope you're all feeling better soon, but glad it hasn't taken away any of the enjoyment of the excellent early buzz for your book! :-)

Now I'm off to look at those photos...

Woohooo! Congratulations on your great review! But I empathize re. the ear infection. Want some of my kids' Zithromax? ;-)

Oh nice cover. Book looks good - I'll be looking out for it *g*

Thanks, guys! I'm feeling better. The second round of antibiotics seems to be doing the trick! Thanks for all the nice comments on the review and cover!
D

Hi Dee, I use to read your work back when you were writng on RoswellFanatics. I'm so excited to finally see the cover of your book! Wow! Congrats! I'll definitely be picking it up!
~S