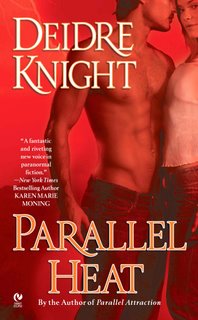 Until publication date, that is! :) I wanted to post the cover copy, which I didn't do until now since people hadn't read the first book yet. But I think it's been out long enough that I can whet your appetite a bit for the next book in the series which, btw, is already availble from Amazon. Just click here.

From the back cover:

In her "fresh [and] wonderfully creative"* Parallel Attraction, Deidre Knight created an unforgettable alternate world of danger, seduction, and the mysteries of time. Now she returns to that world as the destiny of two sworn enemies is changed forever by the unpredictable perils of love....

Warrior and royal guardian Marco McKinley has been assigned a vital mission on Earth, where a war between human fighters and otherworldly soldiers is rising. But he's also been warned about twists of fate yet to come-ones that will transform him into the enemy of his own people and appoint him the personal protector of beautiful soldier Thea Haven.

Little do Marco and Thea know, but they have met before in an alternate universe, and they are bound by betrayal and vengeance. Now, on a world at the brink of destruction, they feel only a forbidden passion and the unease that comes with it....

So much of my fan mail has been about hoping Marco gets his own story, and even in online chats folks have really pushed me for details. So I'm excited to say that, yes, PARALLEL HEAT will focus pretty heavily on Marco, though there's still plenty about Jared and Kelsey, and much more about Scott. Also, a new character will be in town. :) And she's one of my personal favorites.

More to come! Including some deleted scenes from Parallel Attraction.
Hugs! Deidre
Posted by Deidre Knight at 5:16 PM

Thanks, Ellen! I'm really excited about the next one which, personally, I think is even better than PA. Plus I have such a soft spot for Marco and for Scott, and they get loads of page time. :)

I'm pleased to hear Marco isn't doomed to remain a spot on the carpet. He seemed so interesting. Just finished your book over the weekend and eagerly awaiting #2!

Now I'm trying to decide which scenes would be the greatest to read aloud with Mitch . . . :-)

Nice cover! I like the ruby red glow overlaid on the subjects.

The artist who does my eBook covers is AMAZING. He should be doing print covers.

Ah, Marco. I can't wait to read this one, De. And that cover! I think I'm going to have to write off the rest of my afternoon to daydreaming right now.

Faith and Mel, thanks!! Marco. Sigh. I'm still in love with him!!! I'm having to transition into the writing of book three, but that's okay b/c the *MYSTERY HERO* is soooo hot.

Hey, Deidre, actually I don't recall hearing about Son of a Mitch - do tell, either here or in another setting :-)

I'm going to go post on your new blog now